Grab The Games: Victory At Sea

Victory at Sea is a real time strategy game depicting naval battles of WW2. While the game is not without its faults, the sheer rarity of games on this topic means it is worth checking out. 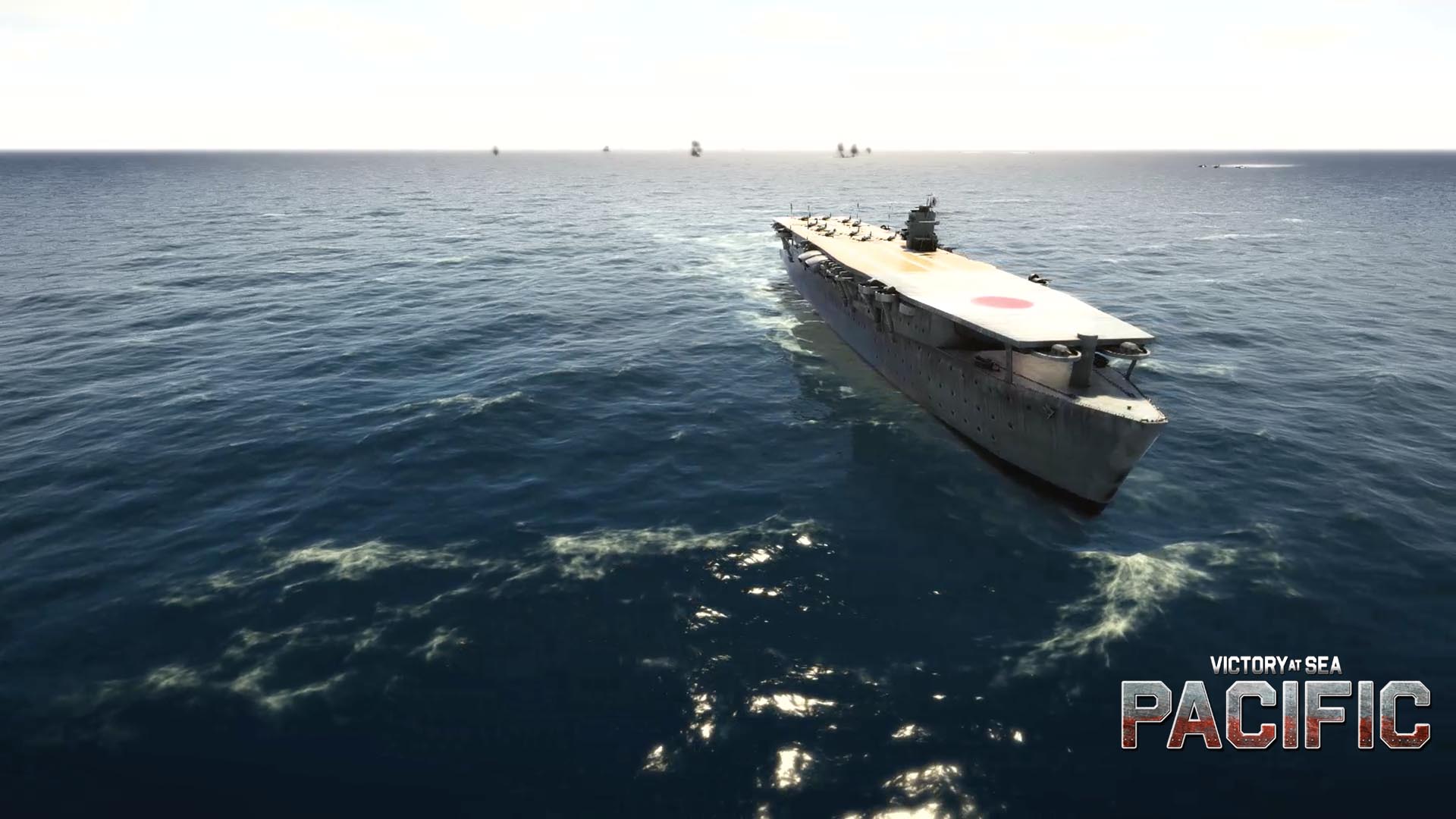 Playing historical battle, so far the only chance to use Bismarck

The game has 3 modes, campaign, historical battles and custom. Campaigns come with a little disappointment, it does allow you to choose 3 theatres (Atlantic, Mediterranean and Pacific) but you can only play as the Allies. This is really disappointing as Axis fleets are have very interesting contrasts and goals. Of course you can play any side in historical and custom battles but I find the campaign to be the most interesting part of the game. It is played on a big map of the theatre (in real time too) and when combat happens you move to a smaller map. The campaign starts with a few tutorial missions, which do their job teaching you the basics both through short clips played at the beginning and easy missions. My only gripe with the tutorial part is that you get the clips explaining the tactical map when you still have only one ship and this map is only useful when your fleet grows. Coming back to your fleet you start with one single destroyer, in combat you gain both XP and war bonds (which function as money in the game). XP is needed to unlock new ship types and bonds are used to purchase them. The system works better later on, when you have access to more ship types with battleships, cruisers, destroyers and carriers being very different, but at the start you can use different types of destroyers, often having the same speed, guns but just different size... so what is better? A smaller ship? A bigger ship? The game does nothing to explain the advantages of either. Still, the system of building up your own fleet works rather well. The campaign itself functions in a dynamic way, you are mostly left on your own with some general goal, from time to time you get specific goals, which you can ignore, but sometimes with dire consequences. For example playing the Mediterranean campaign as the British I started to escort a convoy from Gibraltar to Malta, only to get a message of impending invasion of Gibraltar, not being able to stop it, I lost this base (and for most repairs you need a port, not to mention buying new ships). While this may seem a bit unfair, it does make the campaign interesting and exciting at times. 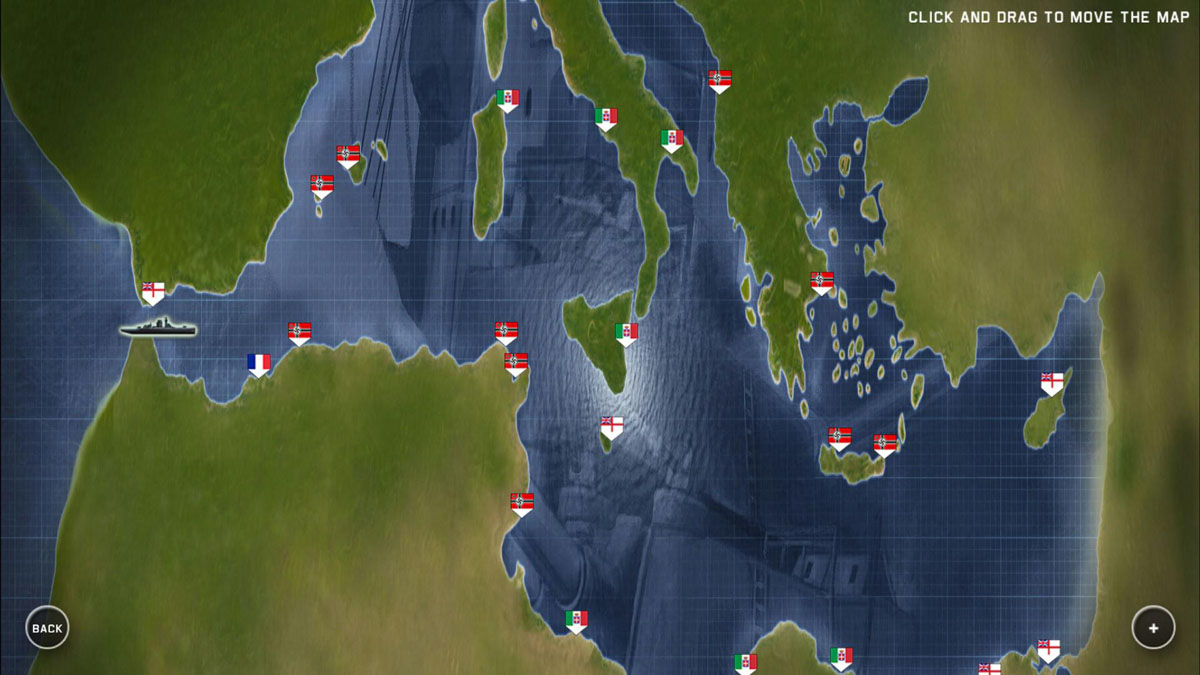 The campaign map covers the theatre well, but looks strange in 16:9

But of course the meat of the game are the battles. They generally work pretty well, although the game seems to be trying to strike a middle ground between a detailed command of a ship and fleet, as a result neither of the two is done ideally. Commanding your ship is rather straightforward you click on the sea to turn and use a slider to set the ships speed. You have buttons that allow you to check the range of your different weapons and you can fire the separately. There is no ammo or fuel, the weapons take time to recharge, e.g. guns shoot quite fast and torpedoes can be used only sparingly. Also, the smallest arms (like AA guns) fire automatically at targets that are close enough. All commands can be issued when the game is paused so you can consider your decisions carefully. The controls are nice and elegant but as long as you have only one ship there is not that much to do and it can be a bit dull at times. The AI does not help here, you can shoot not only at enemy ships but also at any point on the sea. This is vital, you can't hit a fast moving targets that's far away trying to shoot at it, instead you need to aim at the spot the enemy ship will occupy in a moment, get the hang of this and you will almost never miss. The AI seems not to understand this, which means it is terrible at aiming. This is not only enemy but also friendly AI. And here we come to bigger fleets. 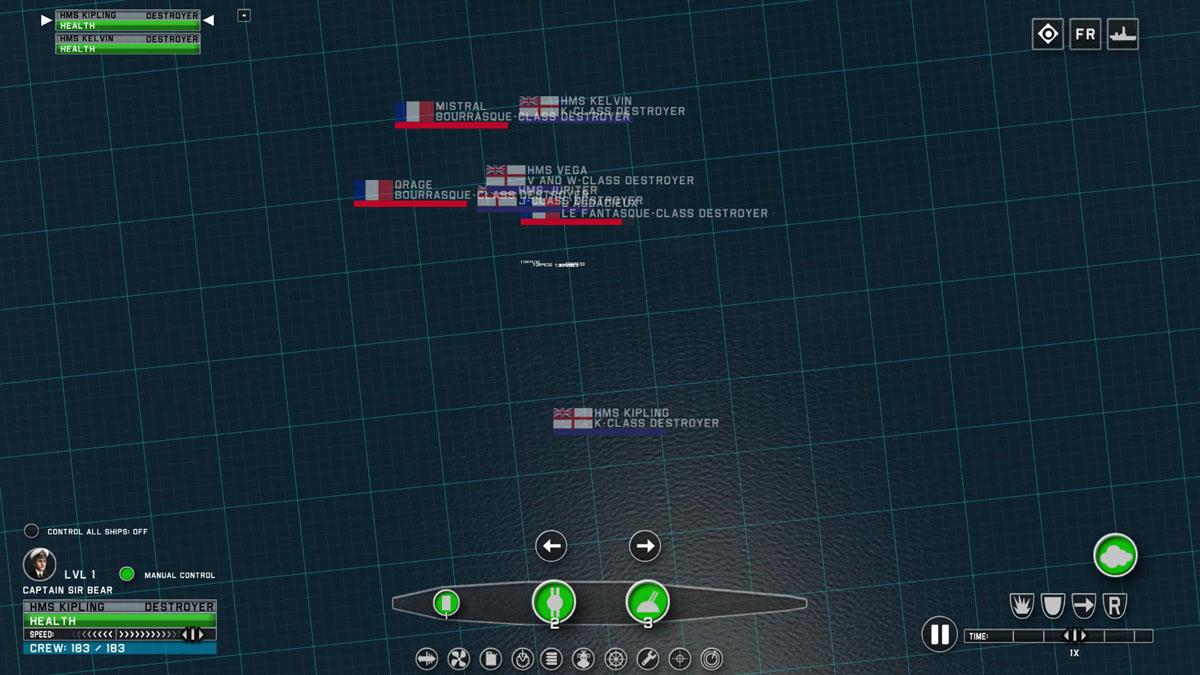 Tactical map show the position of all the ships at a glance.

When you gain more ships by default your own ship is set to manual control (i.e. will do nothing without orders) and the rest is run by the AI. Using the tactical map you can give those ships simple orders, i.e. move somewhere, attack a target, defend the area or retreat. Problem is, while the tactical map does a good job of showing where are the ships it is terrible at indicating in what direction each ship is moving, you can see your orders, but not the default AI chosen ones. Of course, since the game has active pause you can try to direct all of your ships manually. This is doable, although not as good as it could be, the game notifies you with a sound when weapons of the current ship are ready, but no so with the other ships, so you will find yourself jumping through the ships all the time to find the right moment to shoot. It is doable and considering how inferior the AI is, at times it is necessary, but the UI could make it easier to do (also by e.g. allowing you to display the firing range of all the ships at once). 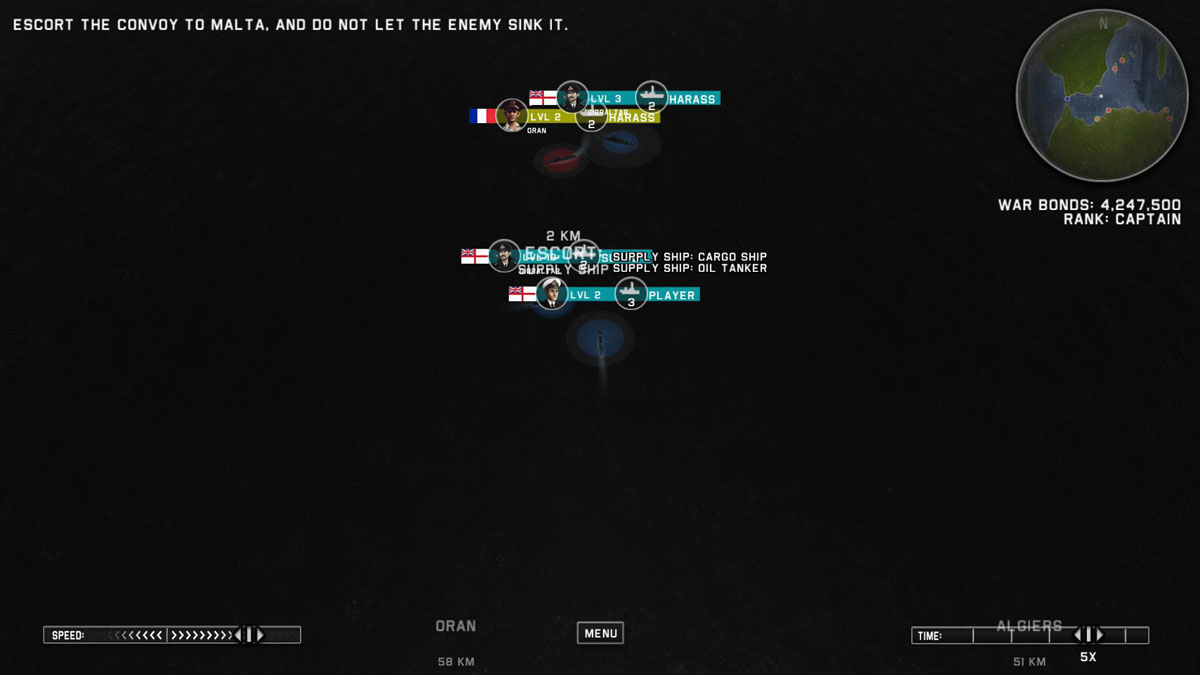 While the campaign map looks good, it is not that readable during the night

Both the graphics and music in the game are decent, although not breathtaking, they do their job and that's it, if you like zooming in to watch great effects you will not find them here. Overall, the game is enjoyable, I have a feeling, that, should we have much more games like this, all the small faults of Victory at Sea, no Axis campaign, UI and AI problems, would lower its worth considerably. But considering that all the naval WW2 RTS games can be counted on the fingers of one hand, even if you work at a sawmill and drink too much, we can't be that picky. This is a really decent game, if you like the subject matter you definitely should give it a try.