Today GrabtheGames and I are so excited that we have hands-on NS 2: Combat, a really anticipated game that I wanted to play since it got released on Steam. 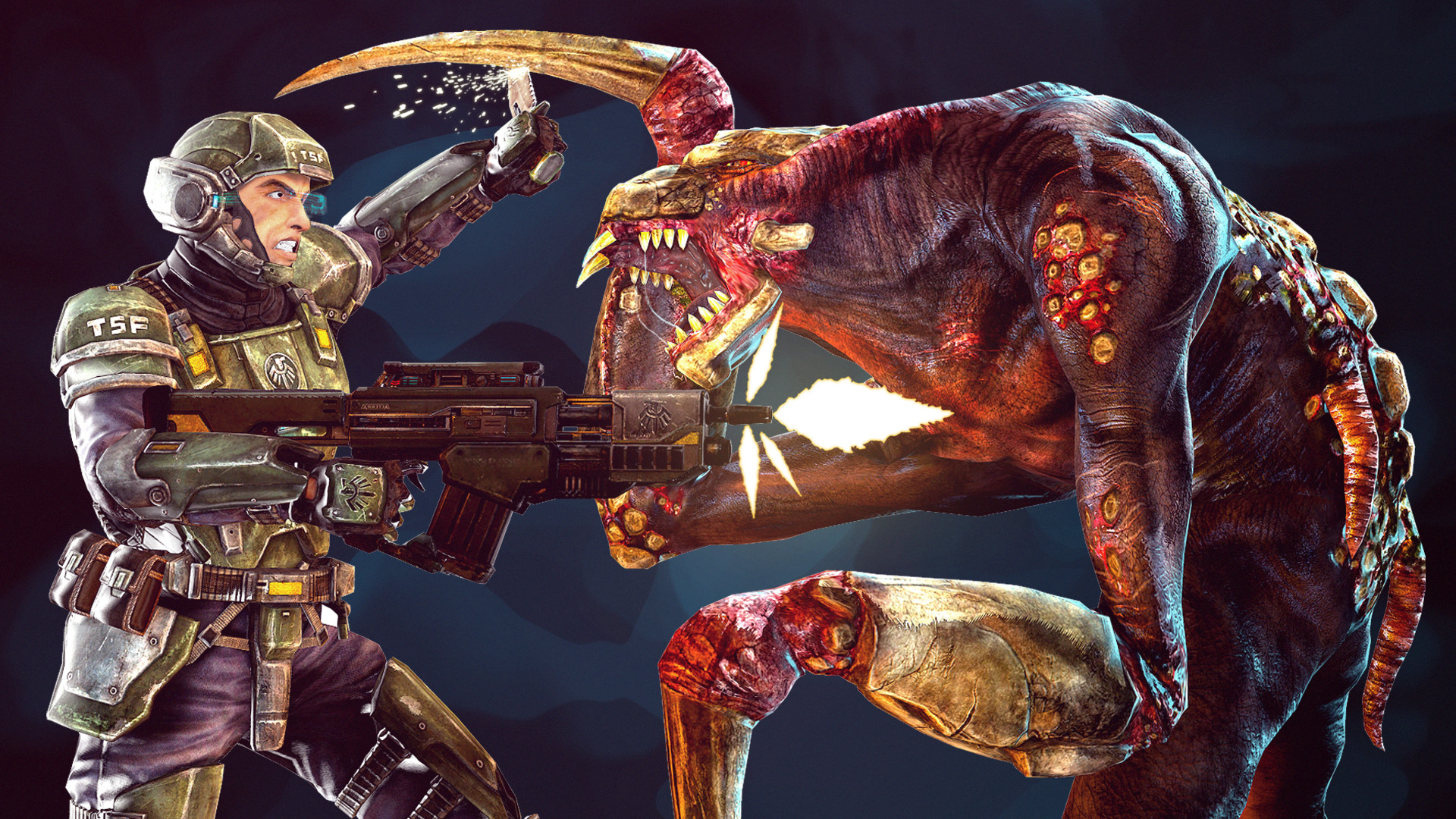 But first things first, you will ask me what NS2: Combat is Dionysis? Great question, let me start by saying that it is a first-person team-oriented multiplayer shooter developed by Faultline Games (a small indie studio that formed from the Natural Selection 2 modding scene in 2012) and published by Unknown Worlds Entertainment (the company that brought you Natural Selection 2). The players in this game can choose between 2 sides the Trans-System Federations (TSF) Space Marines or the Alien species known as the Kharaa. I liked a lot of things in this game so. let's start. 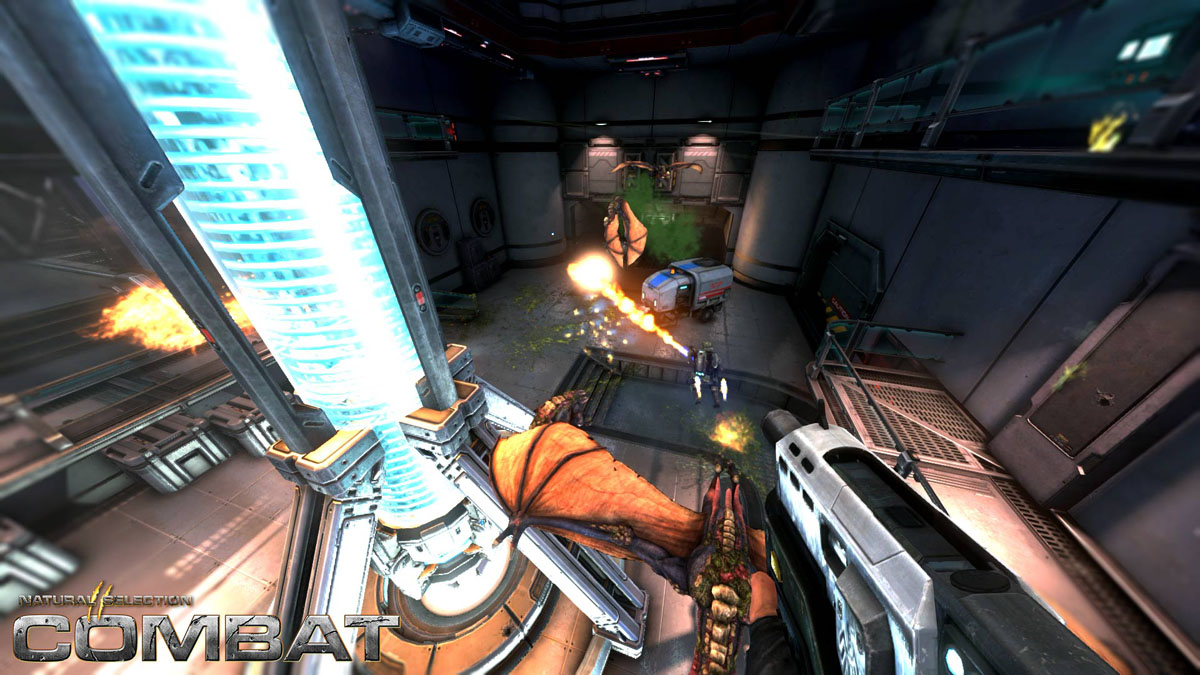 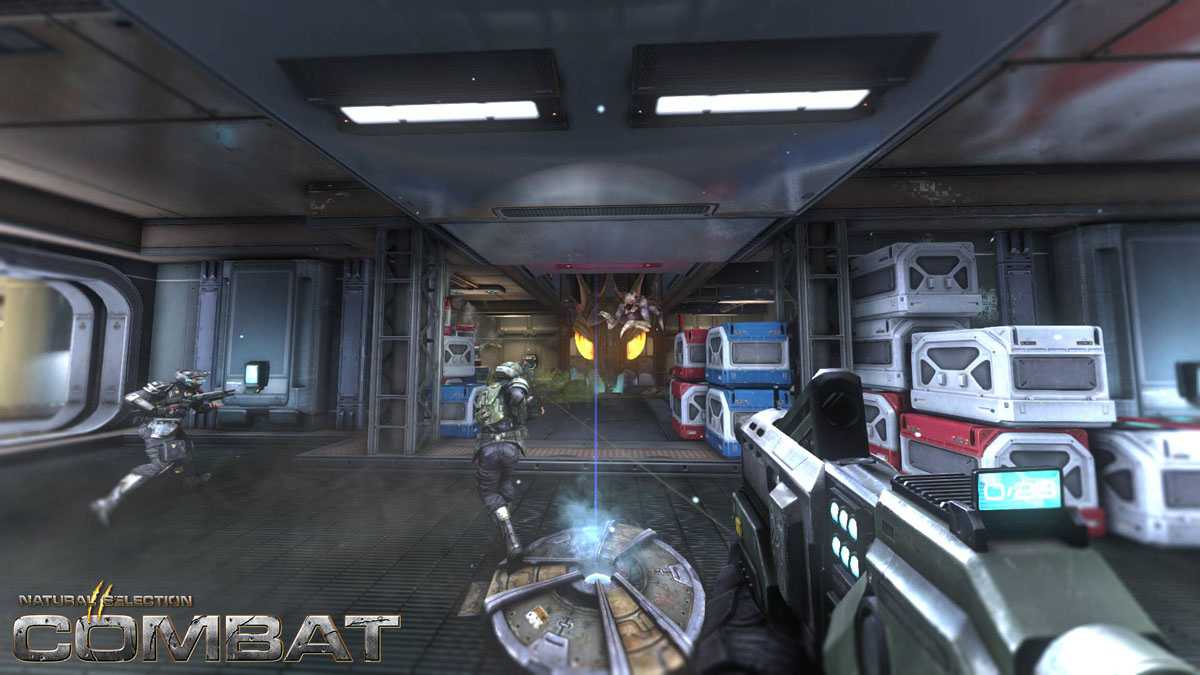 The very first thing that I liked in this game is the fact that the 2 sides of the war have completely different sets of life forms and abilities. If you choose to serve the Space Marines you will use heavy and efficient weapons, grenades, mechanized armors (ohh yeah you heard me right mechanized armors) while the Alien species use more stealth, speed and strength and also the evolution system which lets you evolve from a small Alien (but deadly) to a bigger one and even deadlier. I should also mention another positive aspect for me which is that the match only last around 15-20 minutes which means quicker matcher and more fun. 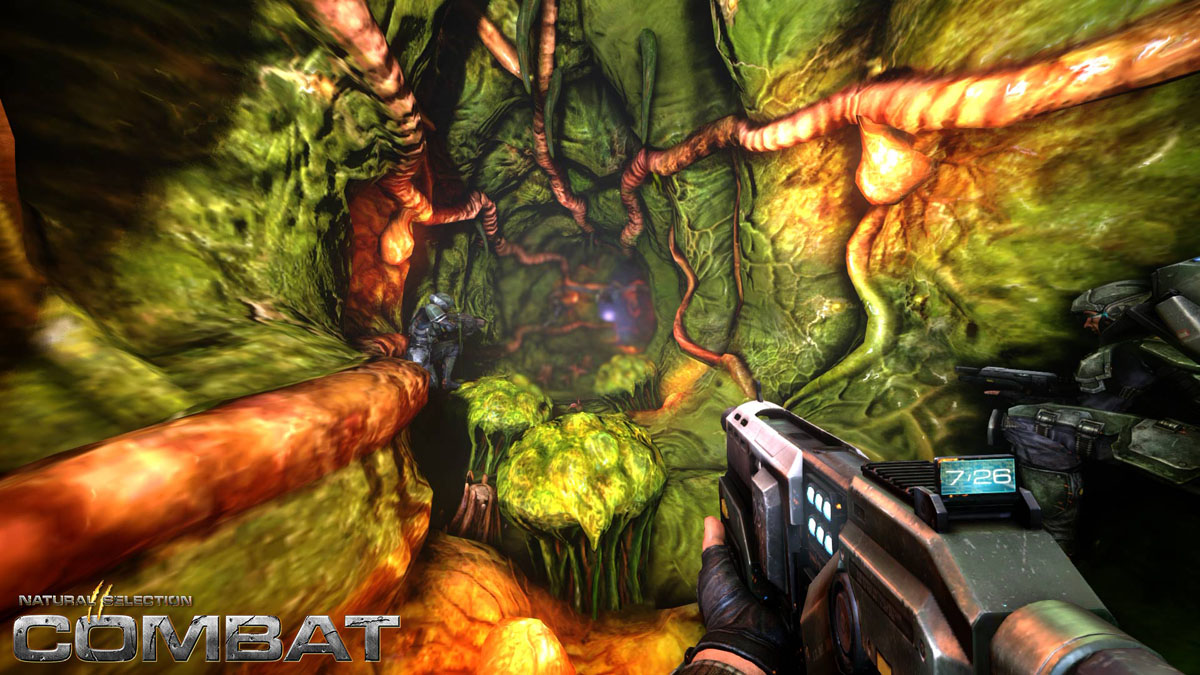 Furthermore, as far as the music and the sound are concerned there are sooo good and the main menu music is still playing in my head.it really adds something extra while playing the game. What about the graphics Dionysis? The graphics are really good and enjoyable and you will get a pretty good game experience even if you run the game on the lower setting. Also, the devs have took care of the bad aspects of the Natural Selection 2 that caused a lot of FPS drops and other problems and with the spark engine installed the game is now smoother and more beautiful. I also loved in the game, the ready roomâ€¦it is something really unique to be able to choose sides not simply by clicking a button but by jumping for example from a big height to a huge black hole and the fact that the members of all teams are present at the same time while waiting for the new match to begin is something really enjoyable and fun! 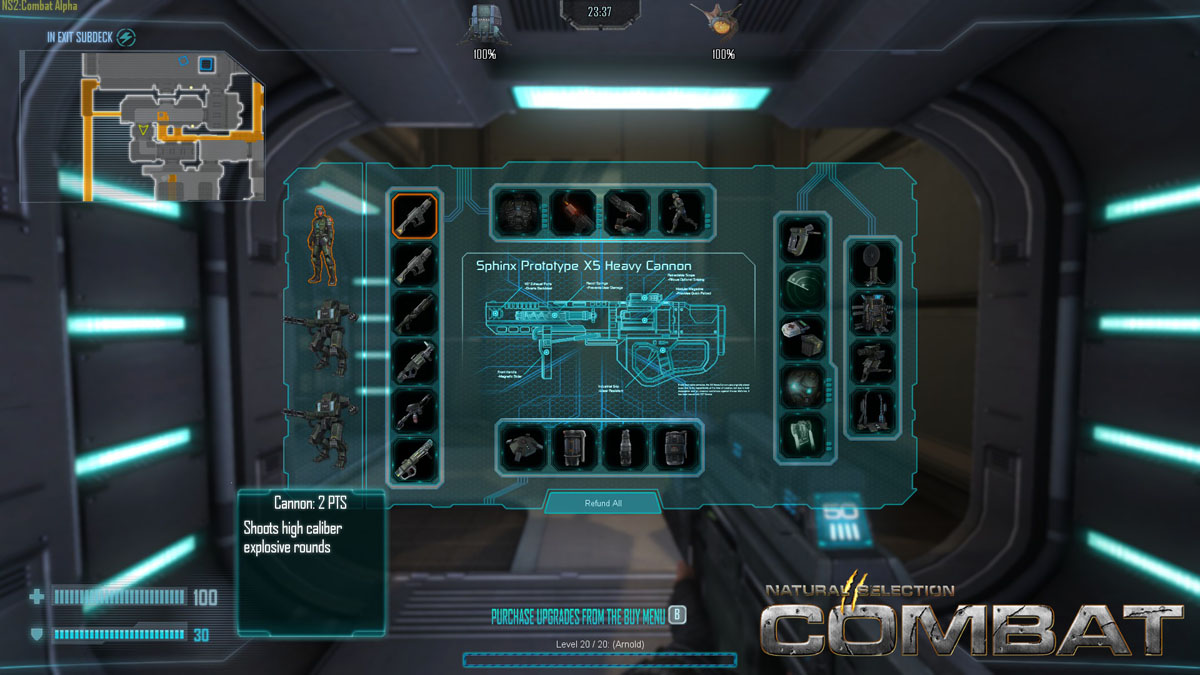 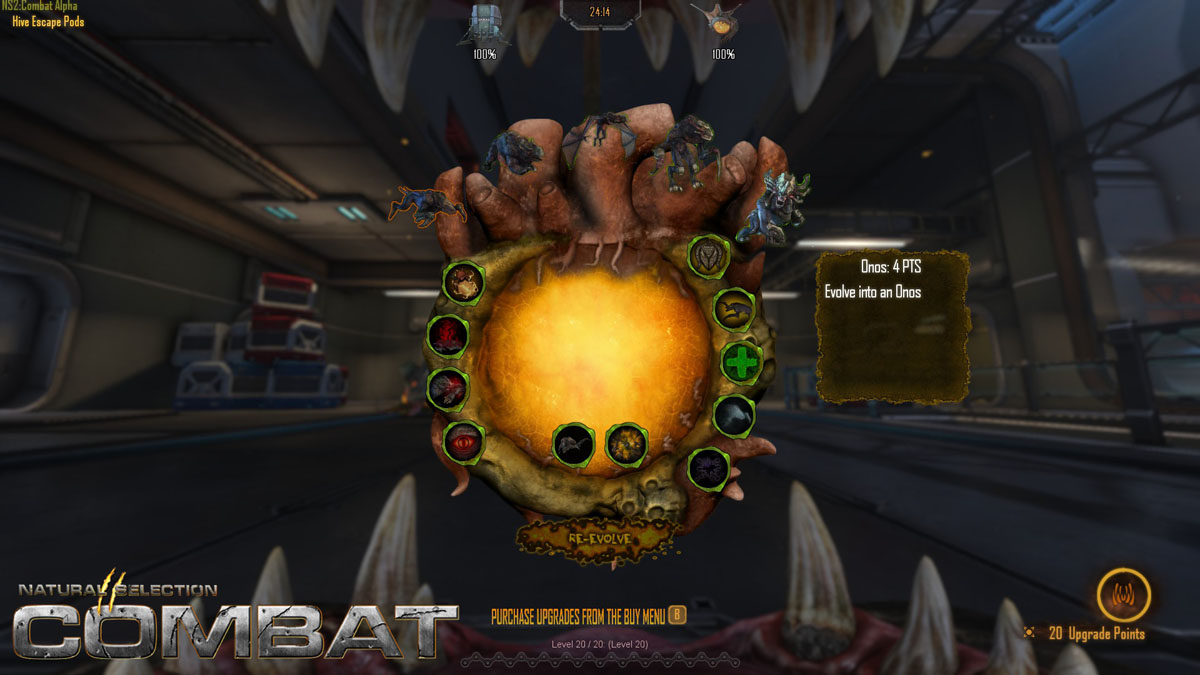 Let's talk about the upgrade/evolution system now. As an Alien and a Marine you will get in game XP by killing other players, fixing their armors etc. and level up (up to level 15). You will be able to use the skill points you get either to get another weapon or upgrade your abilities or even evolve if you are an Alien and kill the enemy team with even more fun ways. Are you bored of playing online? That is ok NS2: Combat has you covered. You can play with bots and practice and as a result you will get better in the multiplayer as well. There are also 2 game modes available capture the point and death match with more thing to come. 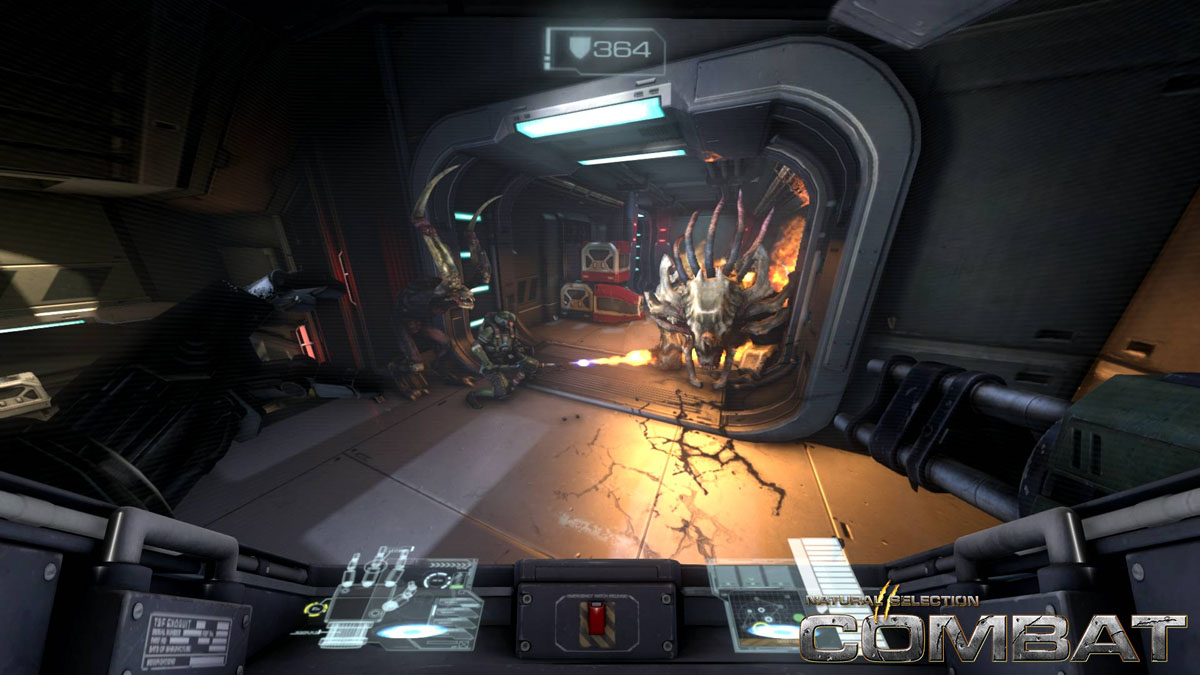 Now time to state the negative aspects of the game, that there are not really negatives since the devs reassured me that they will be addressed soon with a new update and improvements. The first thing that I should mention is the feeding as a newbie player on the Alien side of the war you can easily feed the enemy team with a xp and that is sometimes really unfair because in that way Marines can easily gain the upper hand and win the game really quickly. Another negative aspect for me is that there are a few maps to play at this state of the game.

I am sure the old players of Natural Selection 2 will ask me why buy it? Why it is not added as a DLC or a free mod? The Devs of NS2: Combat have worked really hard at fixing / creating / amending, source code for at least year, solving all the problems of Natural Selection 2 and creating a really unique experience for old and new player on the Natural Selection gaming Universe. Finally, NS2: Combat is a really good game with a lot of positive aspects and everyone should really try it. It is one of the most enjoyable and competitive games I have played this year, with a really friendly and helpful community. This title definitely deserves to give it a go with more awesome features coming in the near future.