There once was a time when RTS games where the king. Publishers considered them to be a sure win, which resulted in huge numbers being made all the time... and as it often happens in a situation like that, most of them were terribly generic and bland. This in turn resulted in two things dwindling in the genre's popularity and in deviation from the tried old formula. While a few games (like Starcraft series) stuck to their roots most went in other directions, e.g. emphasizing things like cover (Dawn of War 2, Company of heroes), controlling the map or adding more RPG elements. Why am I talking about all this? Well, because Meridian is a classic RTS, maybe even too classic for some... Anyway, even if you stop reading now you should know what to expect. 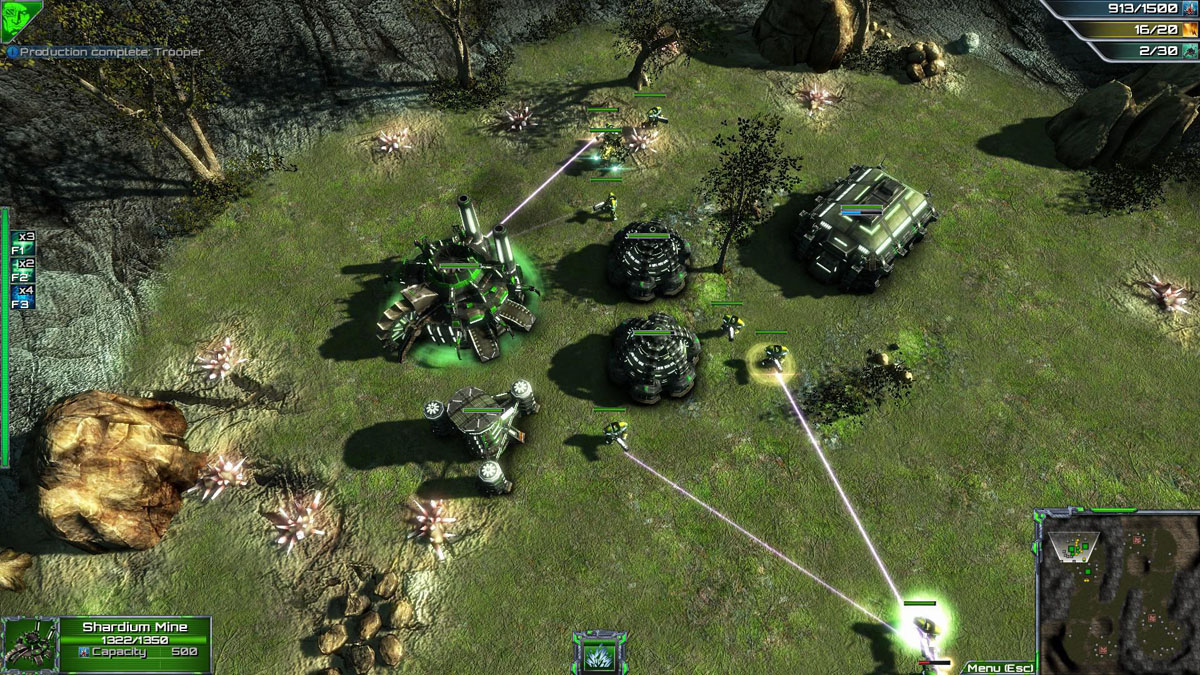 If we teleported Meridian to the 90s it would feel right at home.

Probably the most unusual thing about Meridian is that it was mostly done by one person (additional devs made some GUI elements and graphics). This is quite an achievement, but at the same time, the game often feels like it needs more fleshing out... but let me start from the beginning. You can play a campaign or skirmish maps against the AI. The good news is you can download additional user-made maps. The bad news is â€“ there is no multiplayer, which has always been a very important part of RTS games. The AI is not bad, but it does play in the same way every time. It likes to rush early and then just throw wave after wave at you, even the intervals between them feel the same. The campaign offers more variety, due to the fact that it tries to give you different objectives (including stealth missions), avoiding build a base and destroy the enemyâ€ as often as not. Problem is, it is done using a lot of scripting, which feels very artificial, not to mention the scripts sometimes not triggering because you were two pixels away from the spot. I feel this is a big problem in an RTS game, whatever the gameplay itself, you need proper variation and challenge and the game tries to provide that in a very generic way. 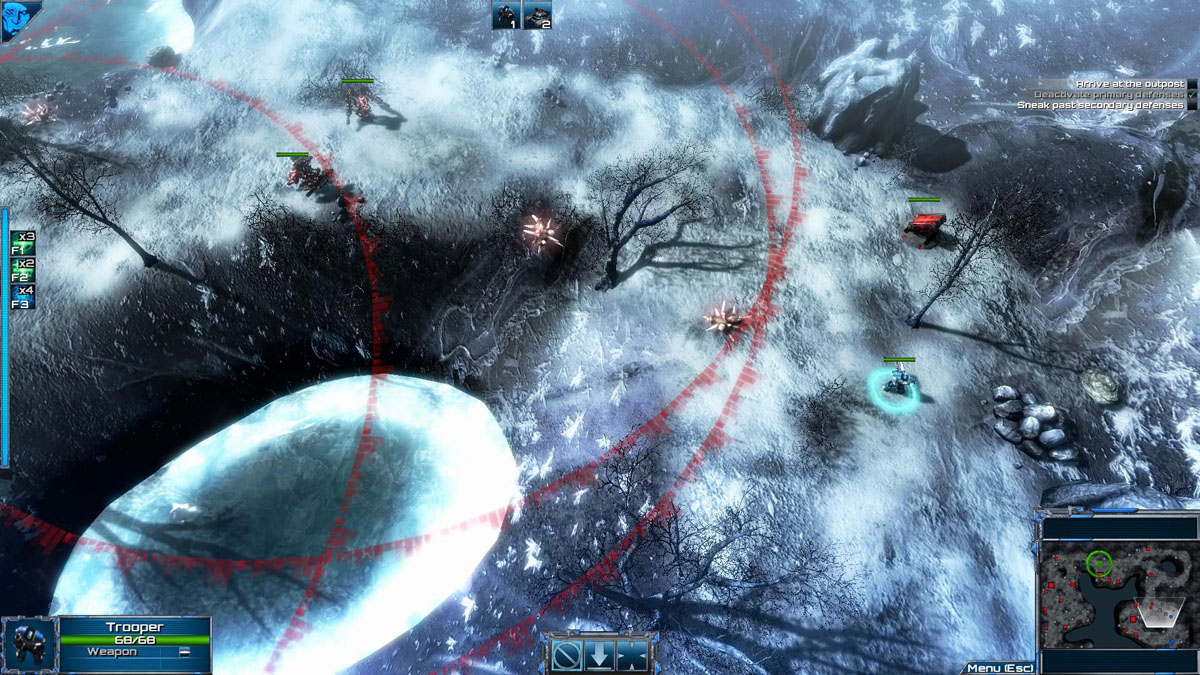 The attempt at stealth in practice means avoid the red lines!

Speaking about generic most of the gameplay would be right at home in the 90s. You have 3 resources shardium (with which you pay for most things), power (required by buildings) and food (which can cap your units numbers). Sounds familiar doesn't it? Shardium can be mined by units, there's also a building that does it, albeit slowly. Interestingly it has to be stored somewhere, so you need to construct buildings for it if you want to buy something more expensive. At the same time this does encourage rushing. The building chain is very, very simple and straightforward. This is good, as the game does not have something like a key/button to select an idle worker, you have to find them yourself. Similiarly the unit selection can be done by clicking on them (double-click selects units of the same type) or dragging a selection box. So, the basics that you would expect from an RTS... but the units do not keep any formation, if you create a selection of units you can't order sub-groups or easily see things like the number in the selection. So the improvements to the formula done over the years are ignored by the game. In an attempt to shake things up a bit, you have special abilities (like heal, damage boost etc.) which basically work like spells. You will level up with time and this allows you to select new abilities from the tree. The skills themselves do not use any resources, just have a timer so you cannot spam them too much. While there is some cooperation between units (like units that heal one another) it requires a lot of micromanagement to position them properly. It is especially annoying as when the units see the enemy, they will move in his direction, breaking your line (or getting away from your defensive turrets). The only semi-original element there is, is that you can outfit your robotic units in different way. For example Chimera can be your standard worker, but it can also get different weapons (e.g. good against infantry or vehicles). This is an interesting idea, the problems is your specialized units all look the same making the battles more confusing. 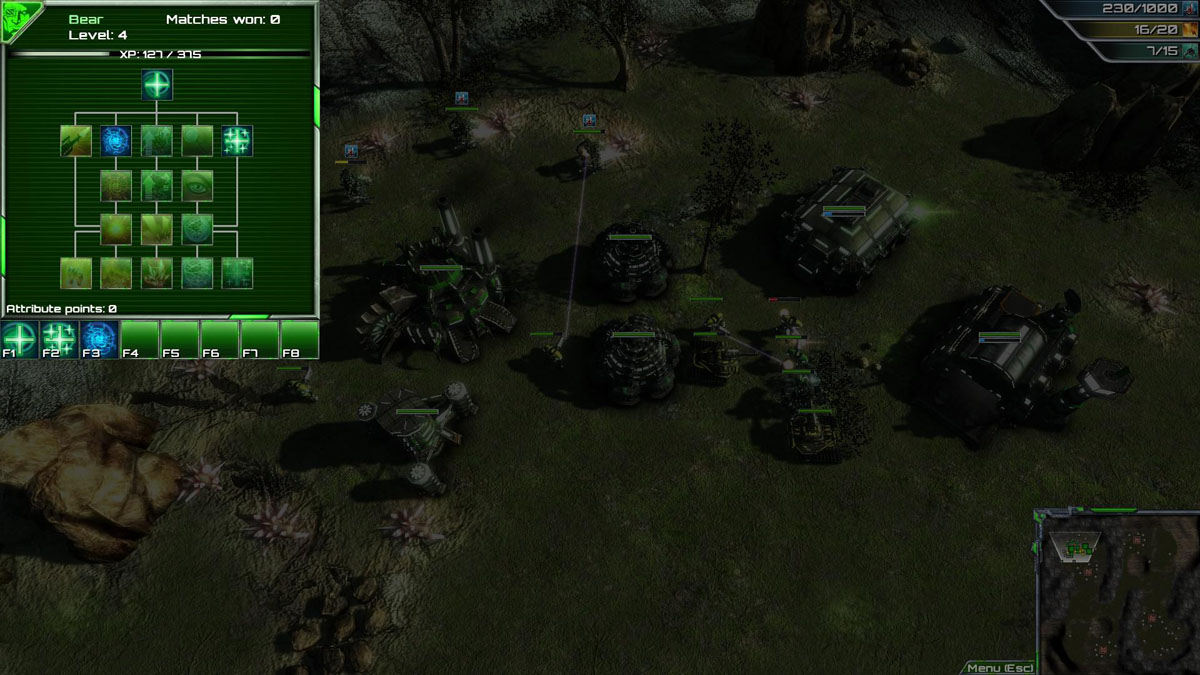 Skill tree in all its glory.

The campaign has a plot, delivered both through text and voice acting (with quite a few cutscenes using the game engine). It is not that bad but nor is it particularly good. What can be annoying and make you want to ignore all the additional info you could find is the base where you find yourself between the mission. It is divided into rooms with different functions and different characters to talk to... and you have to walk between them at a snail's pace. An Xcom model, where you just click on a room to access its function would have been a much better choice. 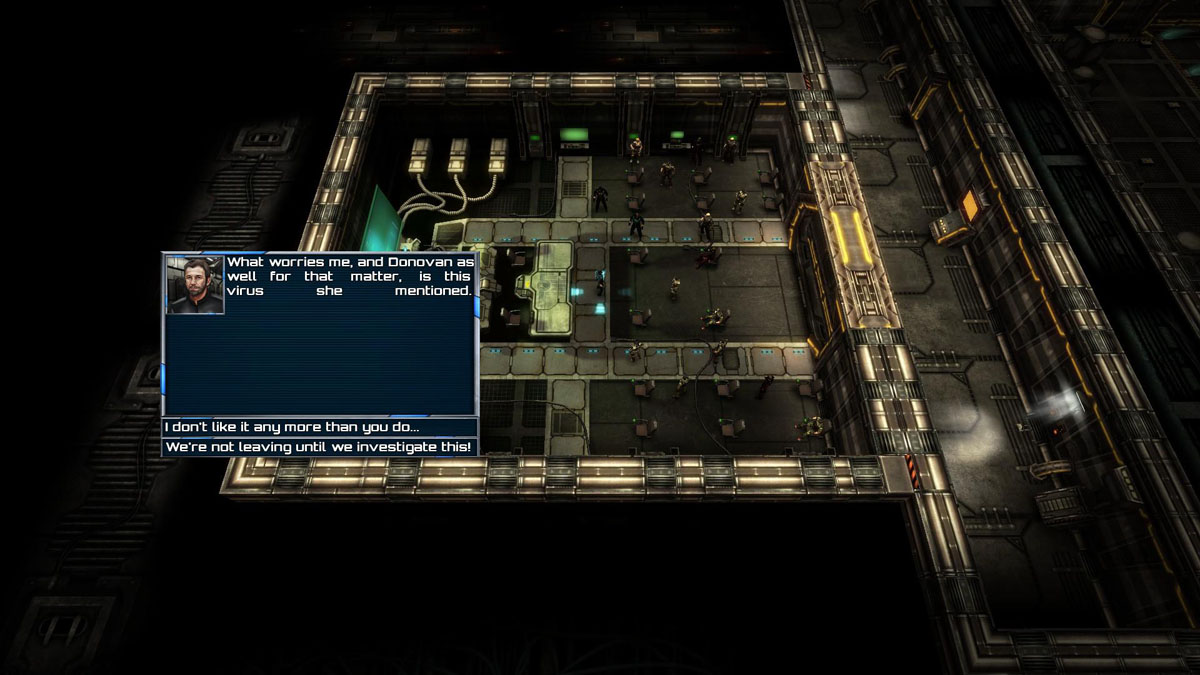 The base gives you a chance to have some not so interesting conversations.

The game's engine works really well for the most part, it looks good and it's fast. There are some quirks though there is no zoom and there is strange acceleration when scrolling the map so you feel like you do not have the control over it. While the visuals are nice, the art style is very generic SF, with everything looking the way it had in 100 previous games. Also for some strange reason all the text is justified resulting in terrible gaps in the middle of sentences. The music and sounds are ok but incredibly... you guessed it - generic. 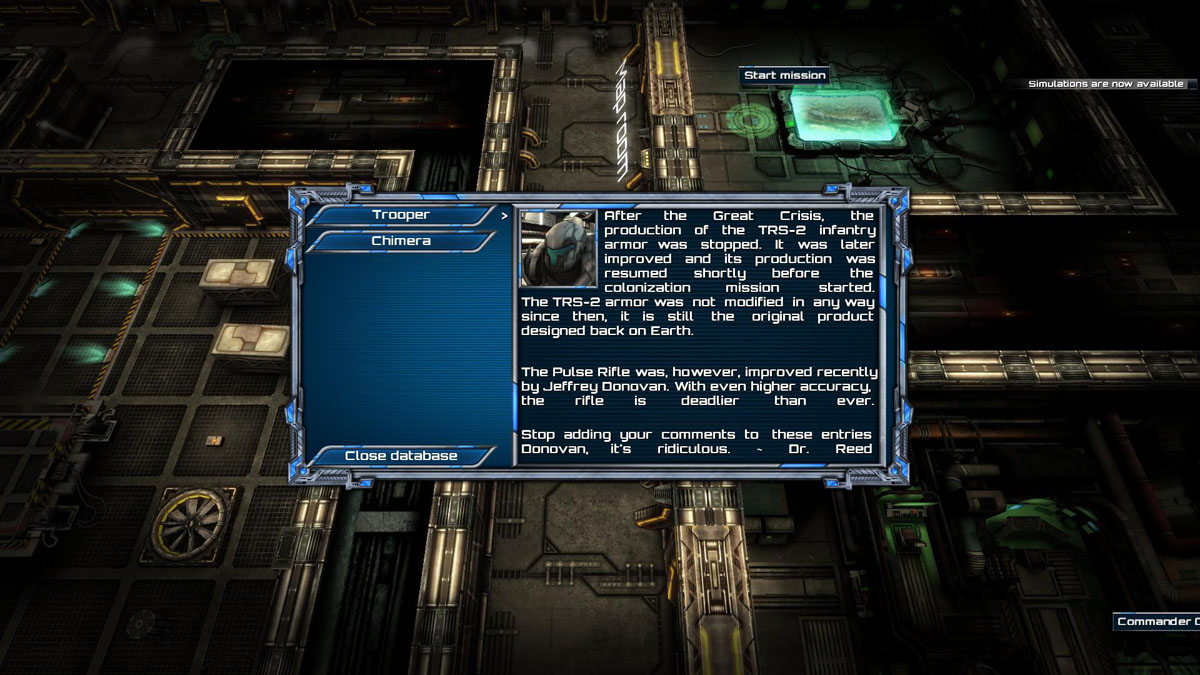 Justified text in all its glory... why would anyone think this looks good?

And here we come to the conclusion, which boils down to the word I had to use over and over again generic. The game is competent at what it does but extremely unimaginative. If you feel nostalgic for old RTS games and at the same time can't abide their pixelated low res graphics this might be good for you, Meridian feels like a remake of 90s RTS. The lack of multiplayer on the other hand means you may just as well buy some old RTS on gog, at least you can expect more innovation and character from those 20 years old games than from Meridian.