If you played Endless Space you will feel right at home in Endless Legend, as it is a fantasy successor of that game. Both the interface and the underlying systems are similar, but the game does change some very important elements (like combat) so it is not just a reskin. Endless Legend is a low fantasy 4X strategy game. For those who do not know the term low fantasy is a fantasy setting with no (or very little) magic. So this is not your Master of Magic game, you have city building, armies, heroes, artefacts, strange races, some spell-like unit abilities but no other magic, no spells you can cast. Considering the fact that we recently had Fallen Enchantress, Age of Wonders 3, Warlock 2 and upcoming Worlds of Magic this is a nice and fresh take. 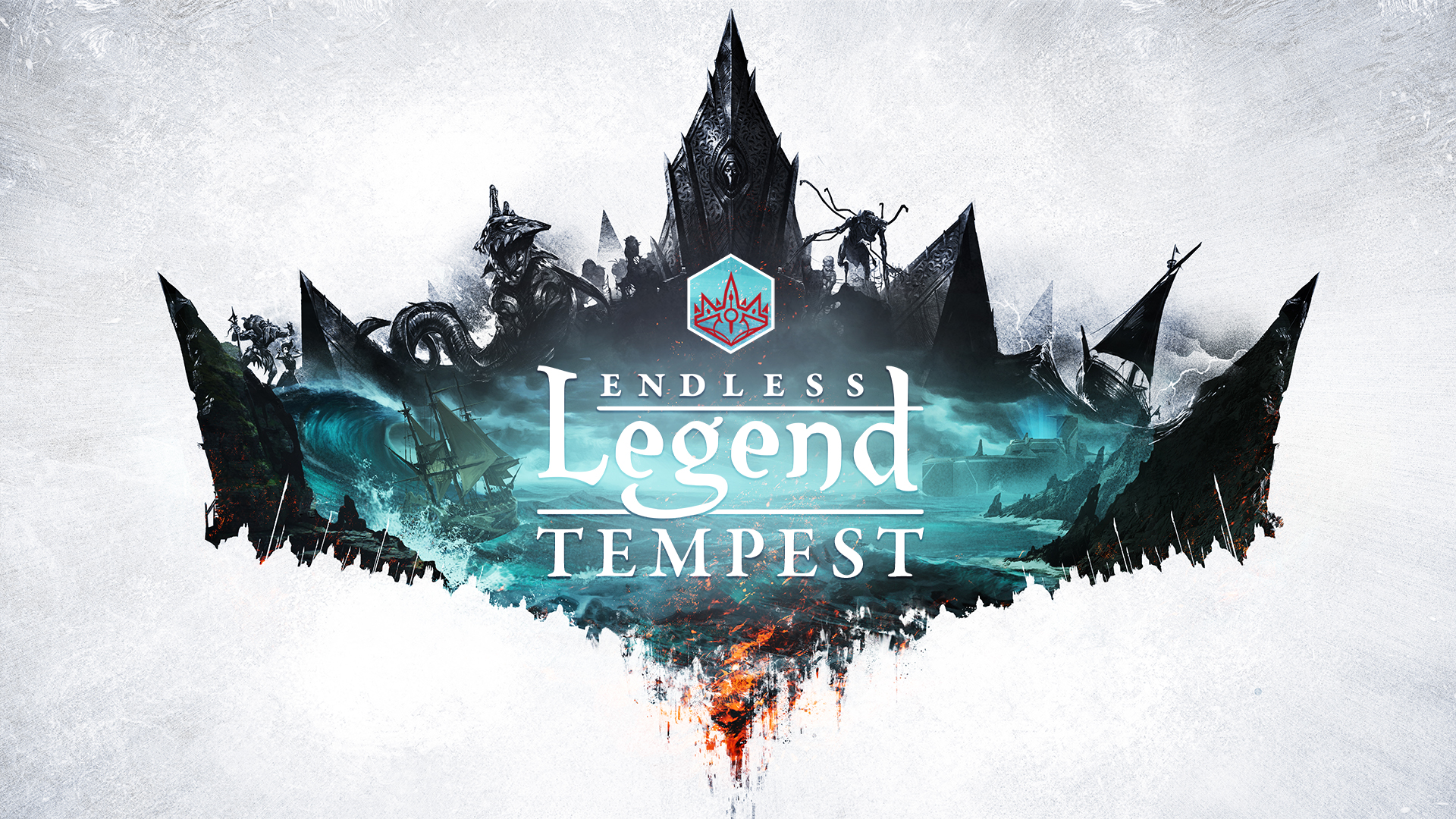 You start the game by selecting of the races, each of them having different abilities, different units and being distinctive enough. After setting the usual Civ-like options for the procedurally generated world and your enemies, you appear on a map with a settler unit, two combat units and a hero. Of course the first thing to do is to settle a city and here we have the first twist. The world is divided into regions and you can build only one city in each region. So its placement has to be carefully considered, but without traditional thinking about leaving space for other cities. Each region also has a village, which will spawn hostile units from time to time, but can be pacified and assimilated (either through conquest or completing a quest) and provide you with a unique unit you will be able to build. The city management itself is pretty intuitive, cities produce food, production, science and money, there are automation options but in my experience they do not work well, e.g. you want the city concentrate on money production and it does so, but not to satisfying degree, manual control is much more effective (thankfully really easy to do thanks to clear UI and a great notification system). In a nice touch the world has two seasons summer and winter, with the latter slowing down movement, lowering production and visibility. Cities that grew during the summer may actually start starving during the winter, this is a very nice additional challenge. Although it seems the devs got scared of their own idea and on default settings the winter is much shorter than summer. 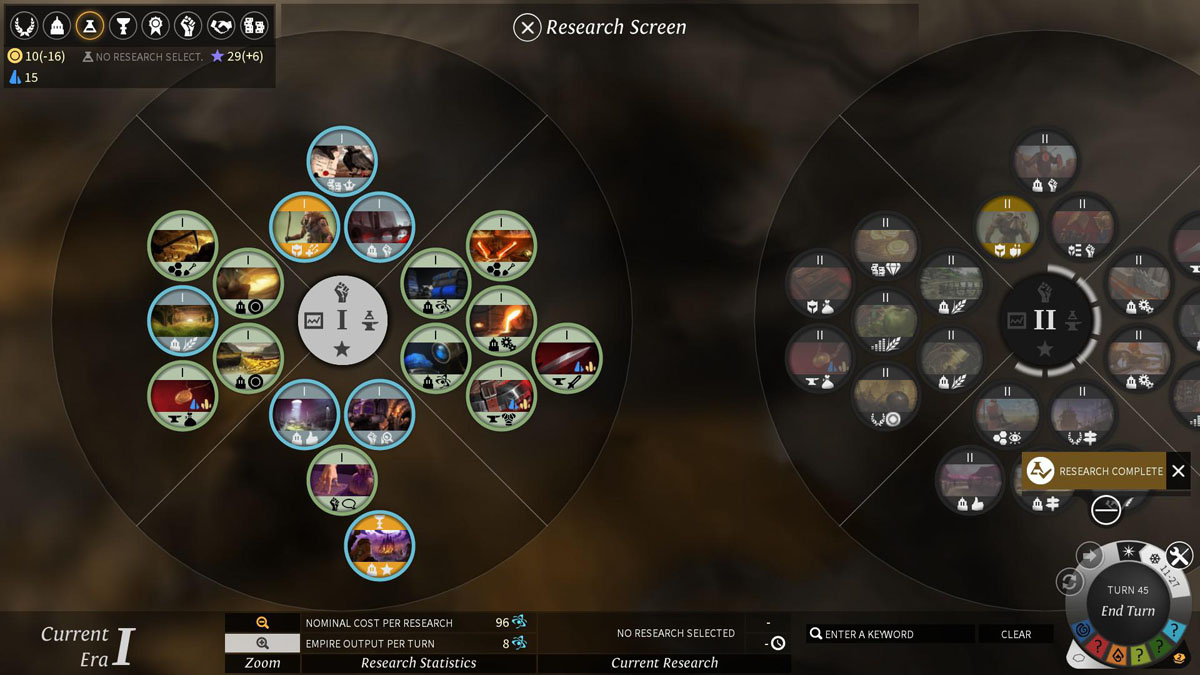 The circular tech tree in all its doubtful glory

The hero you have can be a field commander of an army (also fighting in battles) or a city governor, in a nice touch assigning to a new role takes some turns, so specializing heroes is the best way to go. You can of course have more heroes, these can be hired at a marketplace, but they are random so may not belong to the race you are playing â€“ this is nice for variety but kind of gives a strange feeling if your army is commanded by a hero belonging to the race you are at war with. As for the armies at the start of the game you can produce only one type of unit, you can research further two and get one more from assimilated village. Still the number of available units is pitifully small. This encourages you to use the unit designer, a very easy and powerful tool, you can upgrade your units and create new types just by changing their equipment. For example â€“ axes will attack three adjacent units but spear will be great against cavalry, some armours will not only offer protection but also boost your initiative or critical hit chance. The system works really well, until you realise that the AI is not able to use it properly, giving yet another advantage to the human player. Of course all the equipment that can modify your units has to be researched (some of it also requires special resources). The research does not use the traditional trees but a circular display. On one hand this gives you more freedom of what to research, but also makes it less clear what you need to do to access the next wheel (i.e. the next era). 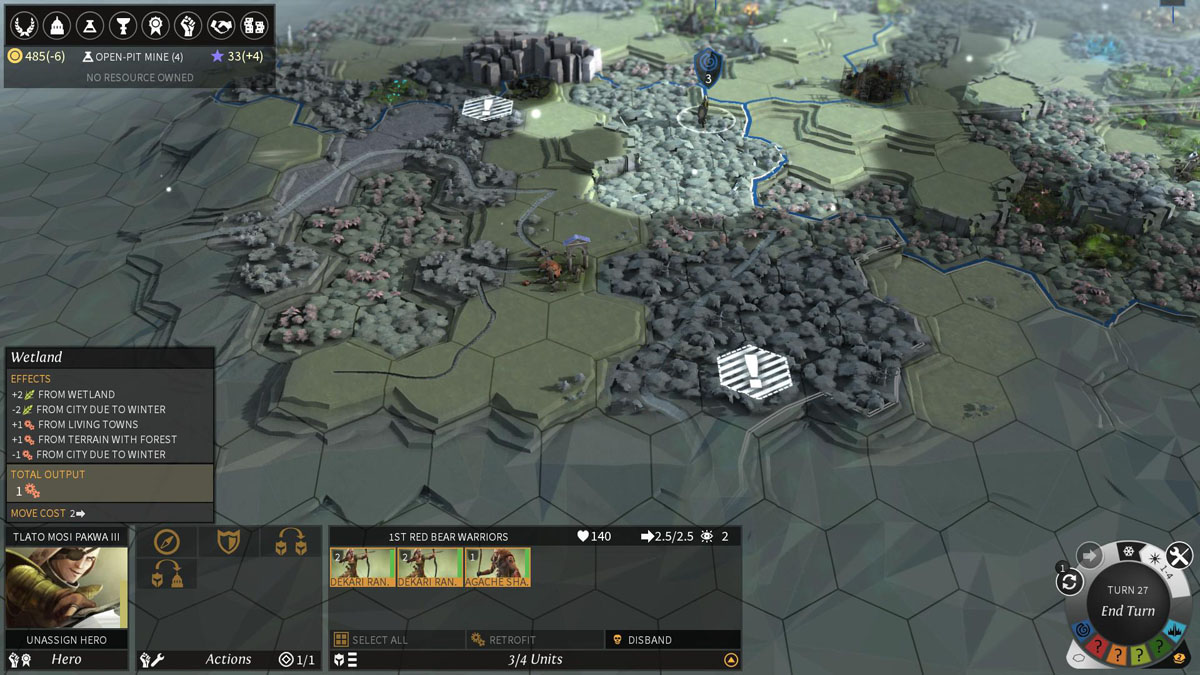 The winter has come

Combat uses a very original and fresh system... that does not work well sadly. When combat happens the game creates a map from hexes around the armies, hiding these elements that do not matter. This looks and works very well. After setting up your army you issue orders to each of the units, tell them what to do if the order cannot be fulfilled (go on offensive, defensive or hold ground) and then both your and your enemy's moves are played out without your control, with all units moving in the order of initiative. There are two big problems with this system. Firstly, at the start of each turn AI gives your units orders that you can change, but don't have to, generally they are pretty good. Secondly, because it is better to kill enemies then just to wound them, ordering everybody to attack a single target and then go on offensive (so that if he dies mid-turn they will attack somebody else) is a good tactic. All this means that can just click on a button without doing anything or use the same tactic every turn and the combat will play itself. You have little feeling of control or achievement. Only with support units you can feel like making meaningful choices. Because chances are the enemy, having higher initiative, will move before your units manoeuvring is hard, and often impossible. So we are left with a combat system that's different but at the same time inferior to other games. 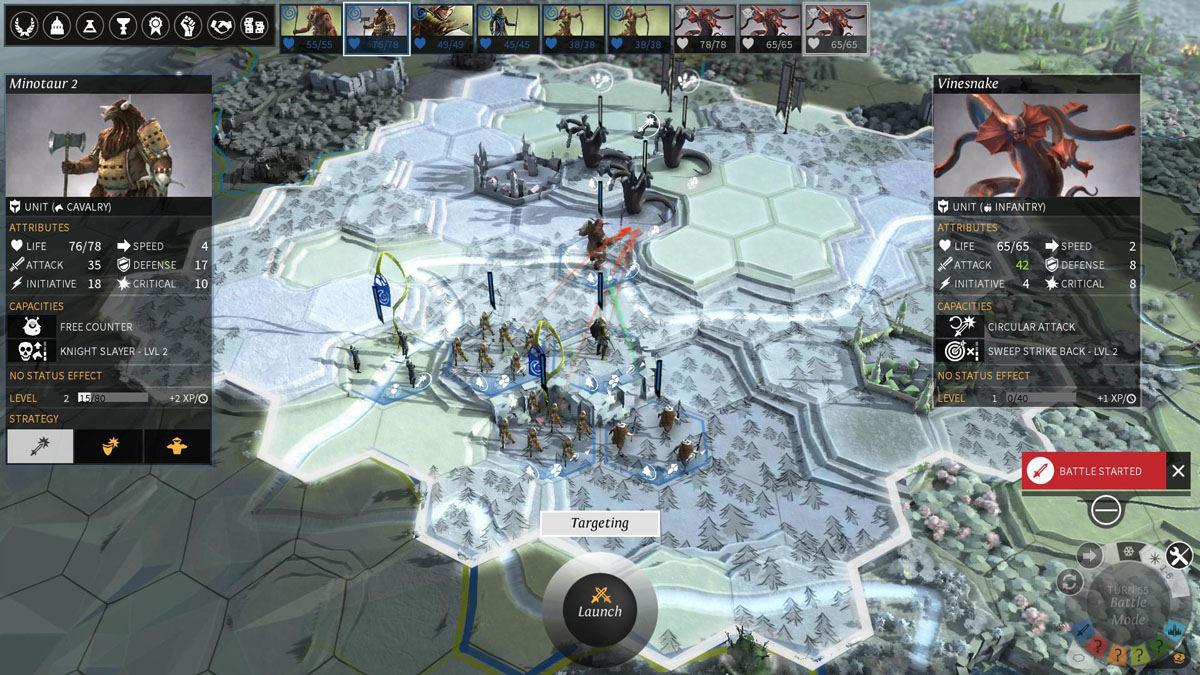 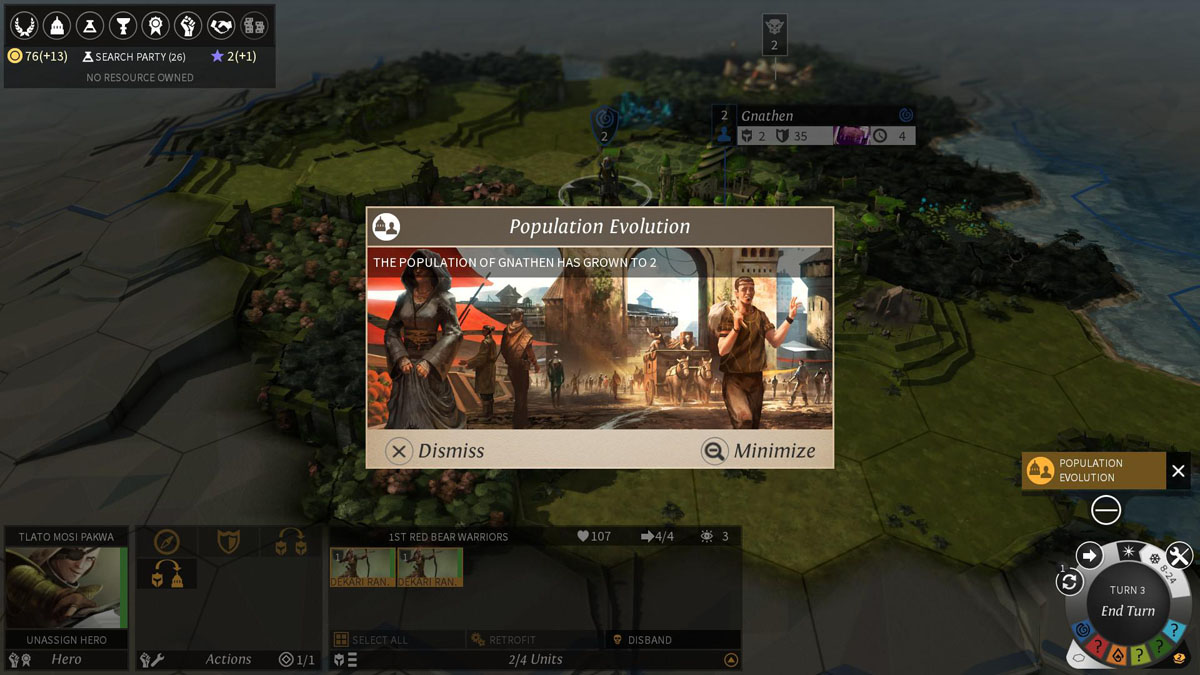 The notification system is very good, ensuring you will not miss any development

Still, the game's world is very colourful and interesting, the game has enough original elements to feel like something you've never played before at the same time preserving the characteristic one more turn appeal of 4X games. Building an empire is more than satisfying and I found myself putting off writing this to play one more game. :) 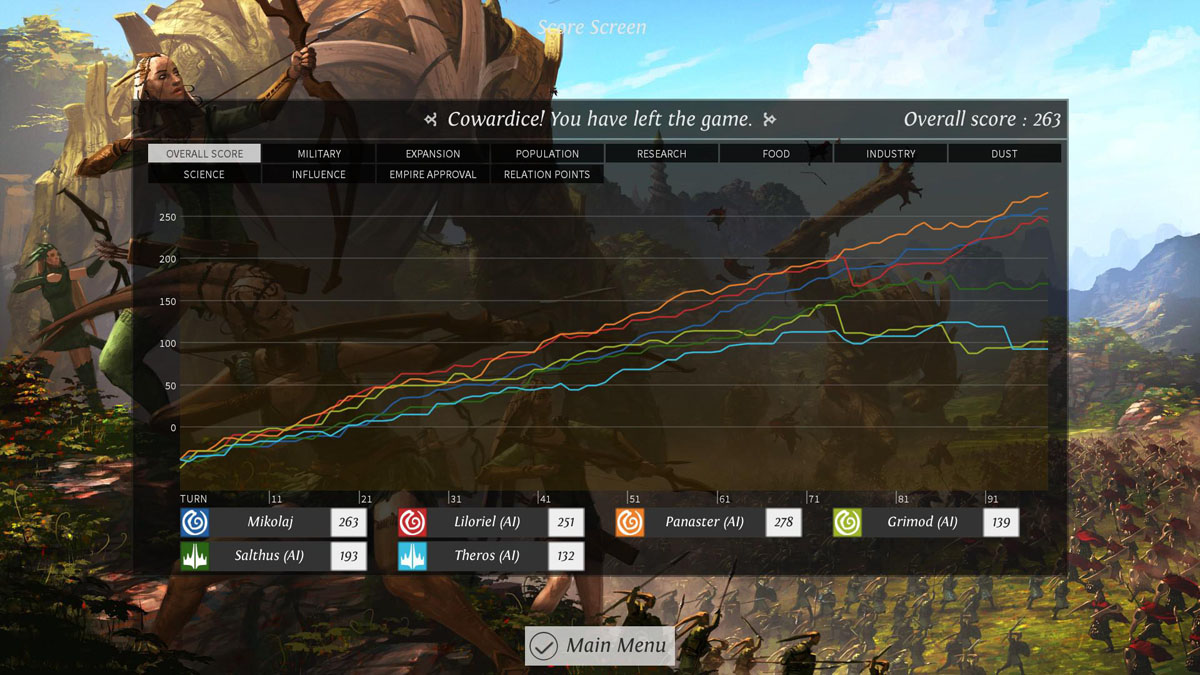 You can find very detailed statistics upon ending the game so that you can see the history unfold.

The game is still in early access and at the moment does not have all its features, although all the important things are in. There are some crashes, problems with world generation, missing tooltips etc. so if you prefer a polished experience you might be better off waiting a little. Also, at the moment the world itself can be more challenging than your AI enemies that seem to be rather passive, I can only hope that the AI will get more improvements before the final release. One last thing many may even like it, but the game has two editions (Classic and founder pack), the more expensive one not only has cosmetic bonuses but also gameplay related ones, like a unique minor faction. Personally I agree with people (like Totalbiscuit) who dislike this type of exclusive â€œdeluxeâ€ editions.