I have to say I don't like hype, most of the time when I hear how great something is, it actually appears to be much less so. But this one time, I have to say, this is the best RPG I have ever played. All the other favourites pale in comparison (yes, it also means you, Baldur's Gate, I'm sorry). Now that's off my chest, let's have a look at the latest game in the Divinity series. 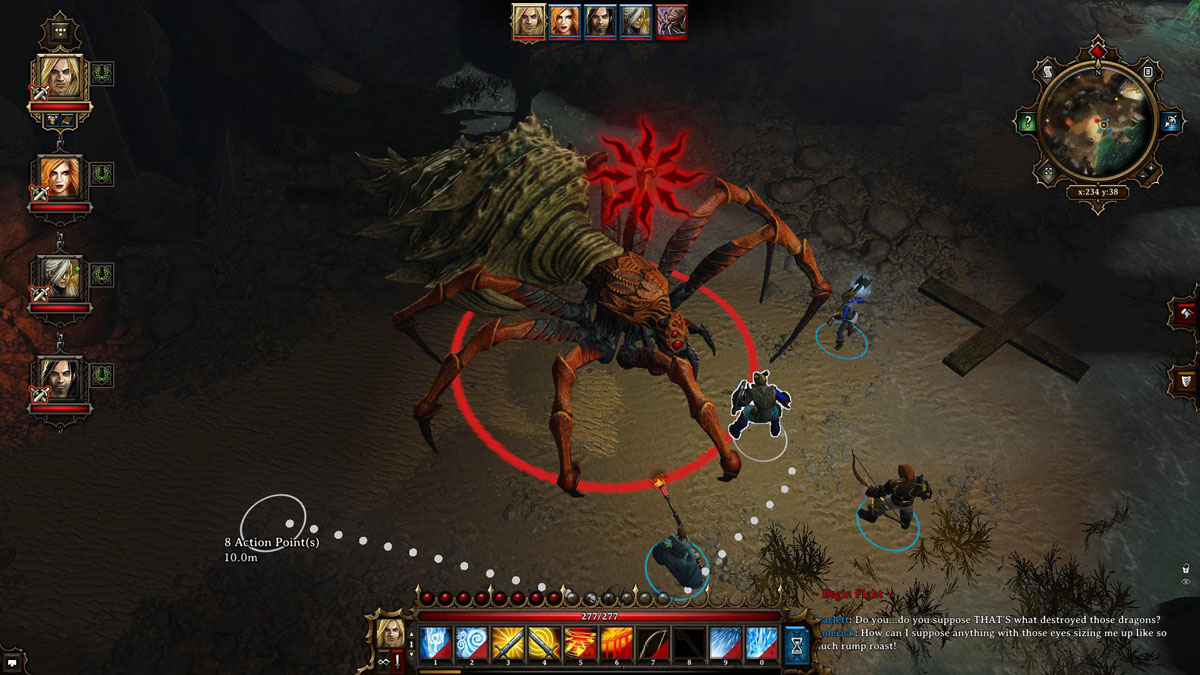 You will fight huge monsters

The series was started in 2002 with a game called Divine Divinity by a Belgian developer Larian (though they swear the name was publisher's idea). It was somewhat similar to Diablo 2 (isometric view, one character, real time) but only at the first glance, it gave an unprecedented amount of freedom, including many ways to solve quests, go anywhere or even fight with a fork. It also had active pause (the devs wanted it to be turn-based, but the publisher did not agree, curse on them). The second game - Beyond Divinity - was similar, but you controlled two characters. Next came Divinity 2, which put more emphasis on action and had a classic third person view. Now comes the newest game in the series, and at that one developed independently by Larian. This is the game they wanted to make all along and finally could do so, partly due to Kickstarter and Early Access (though they say these were more valuable as a source of testing than just financial help). It is good to remember Divinity's history, as the latest game has more in common with the first two in the series, then the previous one. But, of course, it is done in the glorious turn system. :) 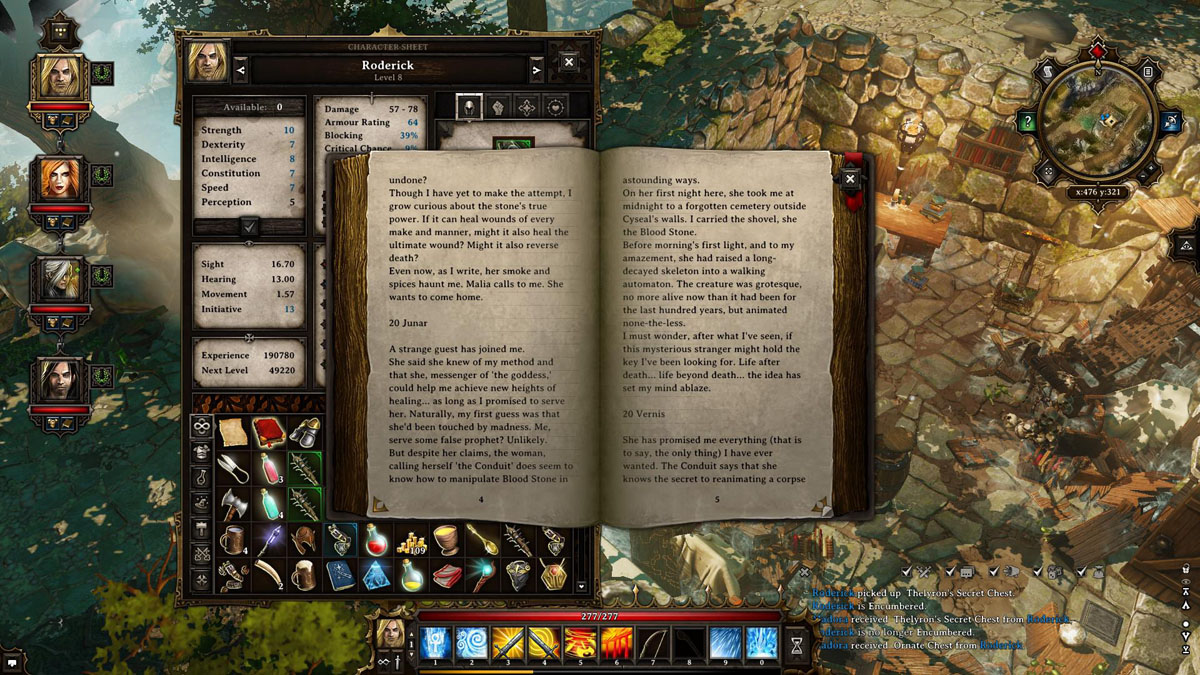 And read huge amounts of text

You start the game by creating two characters, in single player you design and, to a degree, control both but the game is perfect to play with a friend. There were many games boasting how well their multi-player is integrated, but this one is the first that made me regret playing it in single-player. One might say that 2 players is nothing to boast about, with other RPGs offering much higher numbers, but considering how big the game is and how integral the two character experience is, this is a good choice. You can simply find one more person as enthusiastic as you and live through the game together. Coming back to character creation â€“ the game offers you a decent choice of pre-made classes, but they are just a starting point, character development has no restrictions. Want your knight to become a sneaking master stubbing with a dagger? Sure, you can. Want your witch to wield a huge double-handed axe? Again, no problem. Still, even at this stage there are incredibly interesting choices â€“ amongst the choice of talents, usually giving bonuses or some small special abilities there are choice that will change how you play the game. Let's look at pet pal this allows you to talk to animals, opening new ways of solving some quests and actually giving you access to some quests that otherwise are not open. This sense of freedom and choices having sometimes huge consequences is the trademark of D:OS. 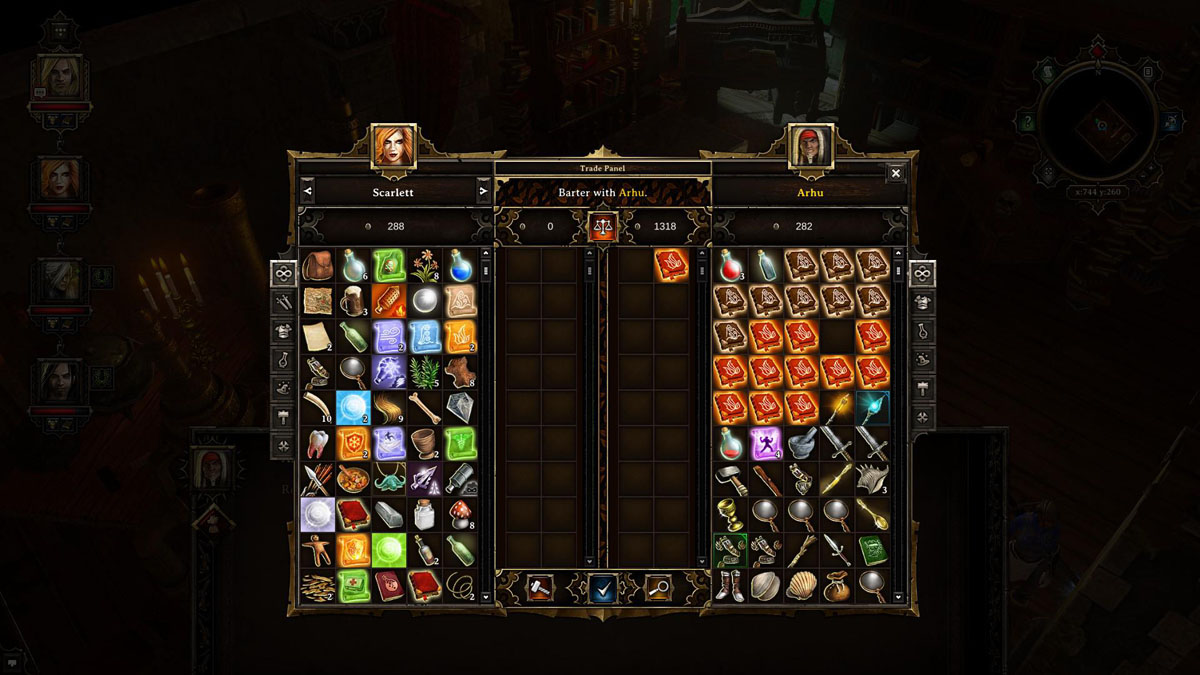 Inventory screens, especially when trading can become too cluttered and hard to read

When you start the game your two character land on beach, called to a city to investigate a murder, before you get there you can go though an optional tutorial dungeon that does a great job explaining the systems of the game, you learn things that are obvious in real life but not so much in games â€“ that if people are standing in water and you cast a lighting spell you will electrocute them all, that a gas cloud will explode when cast fire on it etc. Pretty obvious things, aren't them? But it is not so obvious that they work in a game. After that you get into the city and the first thing you may notice is its characters. Basically 99% of RPGs have civilians, guards, etc. who will say â€œhelloâ€ to you and whom you can kill quite often and important characters with whom you can have complex conversations and who in most games you can't kill because what would happen to the plot? Here you can talk to anybody, you can ask the same questions whether it is a fishmonger, a guard or a town wizard. Most of them know nothing interesting, but it does not mean you can't ask them. You can trade with absolutely everybody that you meet, you can try to kill everybody you meet. You can try to steal anything that is not nailed down, but if somebody sees it they will react. These are so obvious things, but so uncommon in games. Actually, and I find it very sad, some players are so used to games that expose them only to important dialogue that they seem unable to filter it themselves (although this is what we do everyday in our lives) and complain that Divinity:OS has too much of it. It does, if you try to read everything you will drown in the sheer amount of text... but that's the point  you need to think and decide who you want to ask what, not just go through all the conversation options with each and every met character. And that's good to my mind. 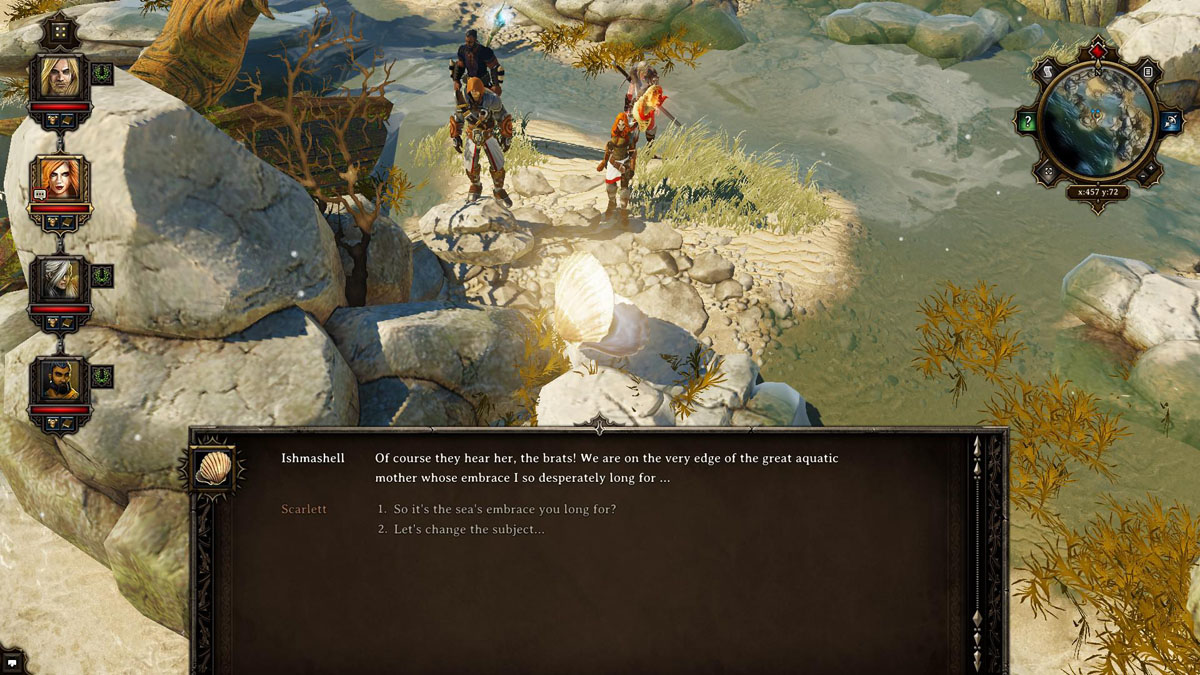 Things like talking shells and other not so serious touches are vey common in the game.

Of course talking is not everything there is combat. At times quite a lot of it, but never boring. Outside of combat everything is done in real time and game turns are translated to number of seconds. All the skills (spell are skills in the game too) do not use mana or anything like that, instead they have action point cost and can be used only once a number of turns (or seconds if you are not in combat). When combat starts each character moves in turn order based on speed, gets a number of points that can be spend each turn (it is affected by things like speed but also e.g. the armour you wear), but if you have an action that is too expensive for your character you can skip the turn (or part of it) and they will carry over to the next one, so you e.g. can cast that advanced spell. Combat system is very simple to learn but has a lot of elements that make it great, you can slip on ice, you can explode things, you can hide behind trees, there are attacks of opportunity etc. I've only played the game on hard difficulty (as that's what I enjoy) and the fights were very challenging, but in a good way. There were fights I had to replay 10 times, but not because I was waiting for a lucky dice roll, but looking for a tactic that would work in a given situations, sometimes while 9 times I lost all my 4 characters in a fight in that 10th go I came up with a new approach and lost nobody. Probably the best tactical combat I've seen in an RPG. 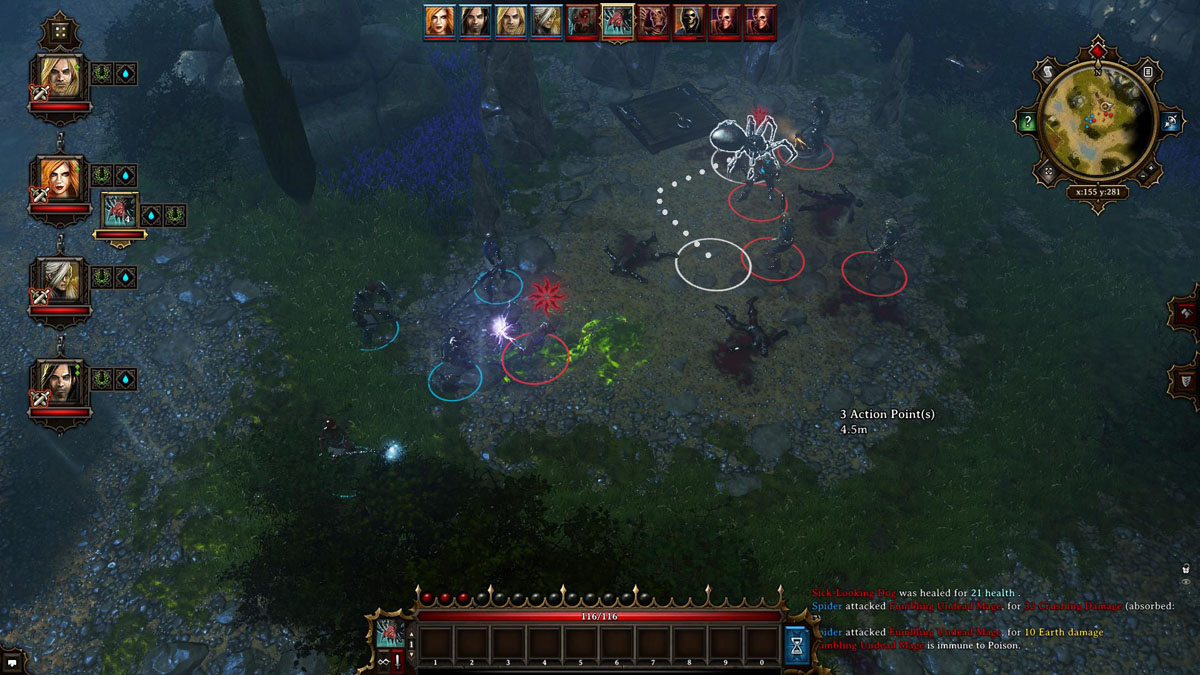 Trying a bit manoeuvring on the battlefield.

There are two more elements to the game I have to praise. One is humour, genuinely funny and used in appropriate moments and the other is music. Especially music comes as a surprise there are so many songs in the game, they are so diverse using so many musical styles and at the same time always fitting what's happening on the screen. It's the first time in a long time I miss having a CD with game music. 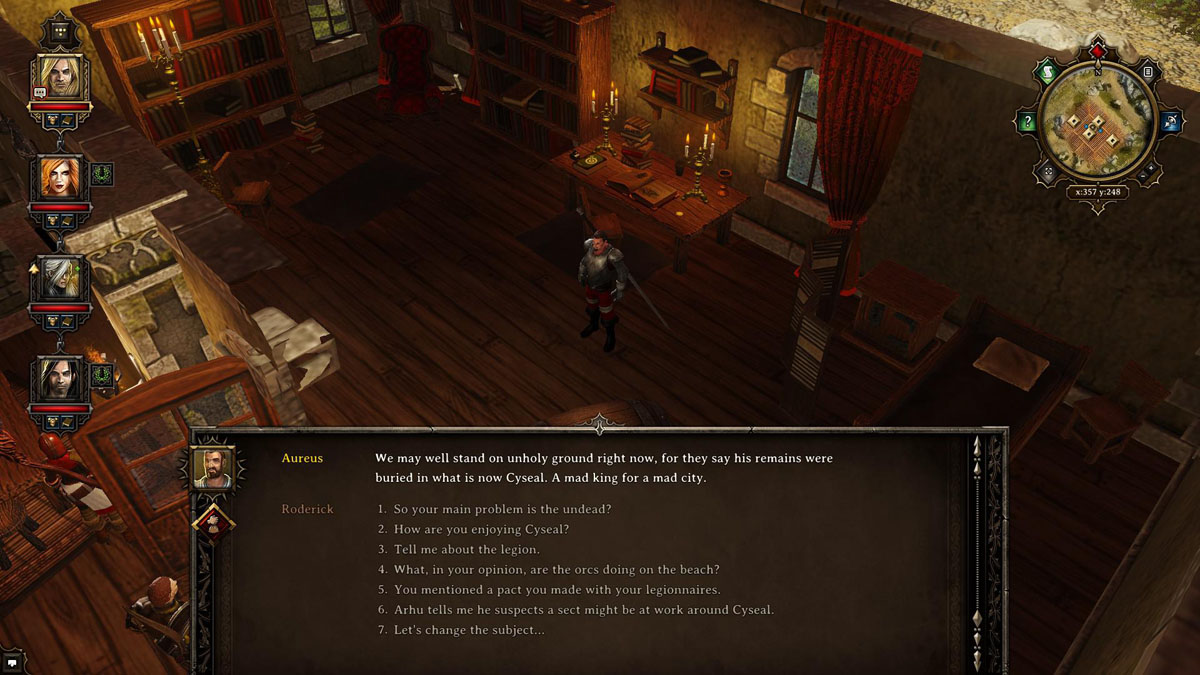 The number of dialogue option is usually anything but sparce.

So far, this has been only positive... no is the time for things I didn't like. They are mostly minor but... Let's start with the two main characters. If you are playing with another human, all well and fine, when playing single player you can give your characters AI personality (none of which is well explained in-game, probably because most of them were added in a patch). When you are in a conversation and make some choice the other character can agree or disagree with you (of course if you choose no AI you can disagree with yourself, yay for role playing!). When this happens you get a short game of rock-paper-scissors. On one hand this is a very elegant idea, after all people do that in real life too. But... in that game there are 3 choices, but probably to make it less drawn-out the AI never chooses that same thing you do, so it seems there is a 50% of winning or losing... could be just a coin toss. This makes it feel like a cheat and also there are situations when due to this silly mini-game you for example have to drop a side-quest you wanted to take. While at first I thought this is a great, fresh and truly role-playing idea in the long run I found it tedious (imagine 10 games of rock-paper-scissors in 30 minutes, sounds like fun?) and annoying at times. 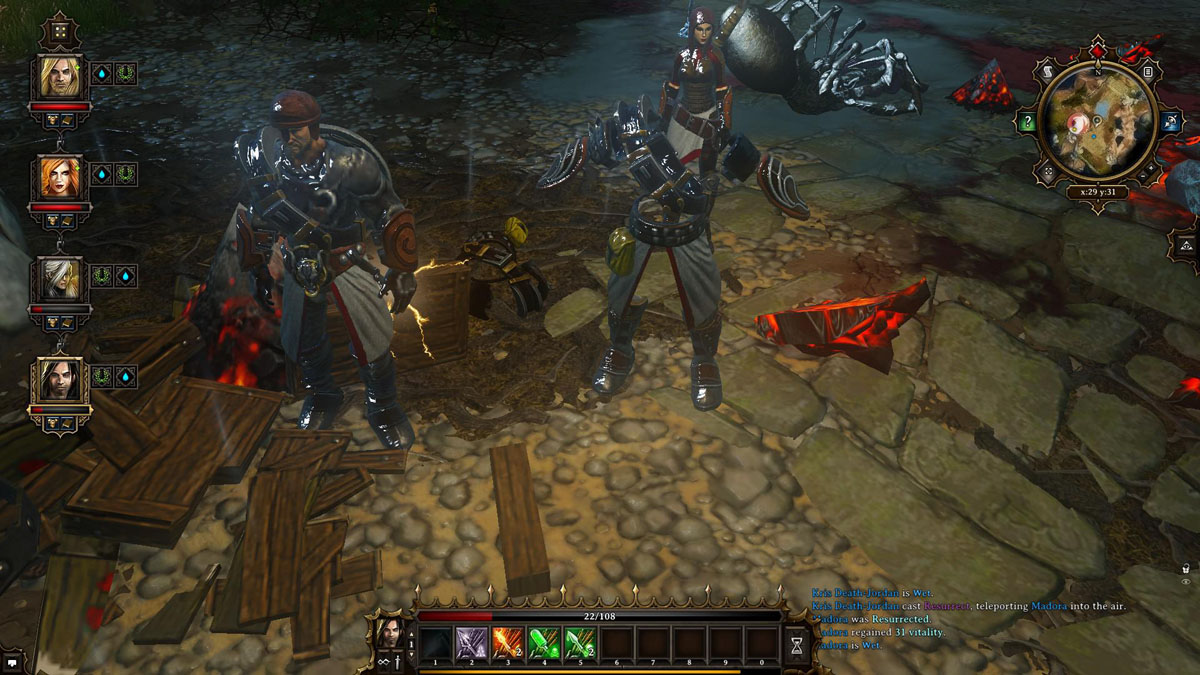 That's the only bug I found in the game (and reload fixed it), in a game this complex this is truly impressing.

My other gripe is the inventory system. Each character has his/her own inventory, and that's fine. But when you trade with somebody only one character can trade, if you want to buy something that costs 800GP and you have 4 characters each having 500GP then no go. Switching to a different character during trade cancels it, even though they are standing right there and in reality you could buy it together you can't. Add to that constant moving items between 4 inventories to repair them, identify etc. and the fact that the inventory filters are not enough considering how many items you can have (as you can pick up anything, buckets, shells, brooms you name it) and the inventory management becomes a chore. 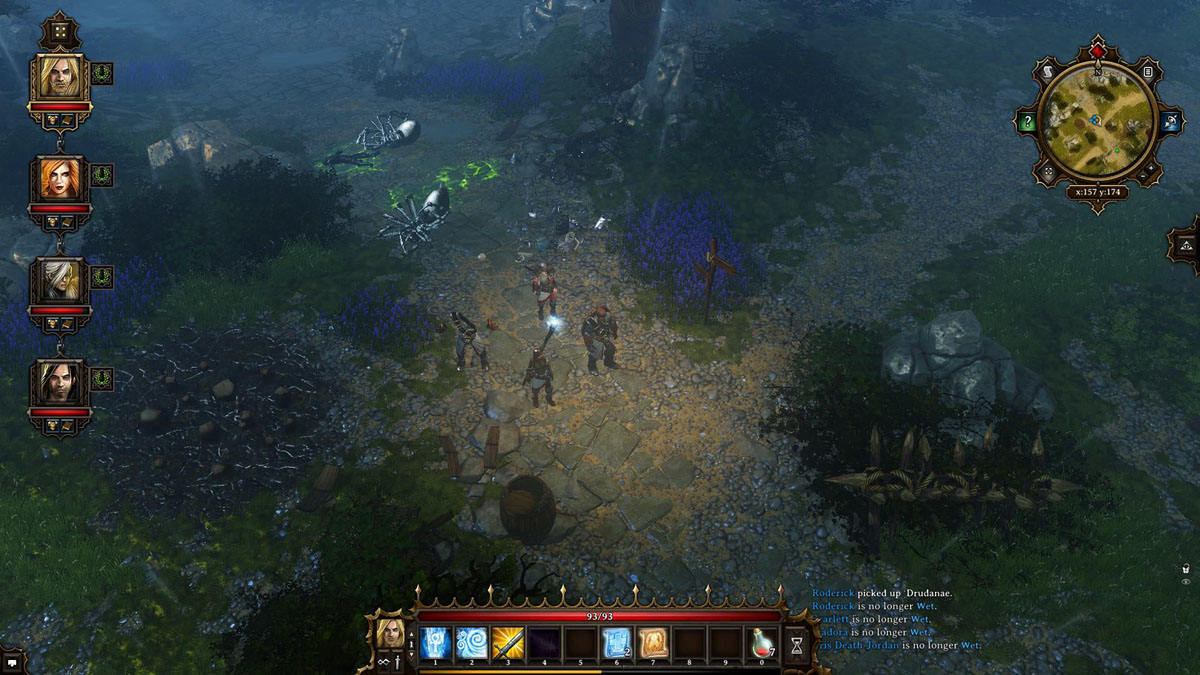 Where to go now? Each road leads to adventure!

Despite minor problems this is still the best RPG of recent years or maybe even all time. This is not a game that you spend a few hours on, it's a game that will suck you in and you will spend a large part of your life living in its world... and that is what RPGs are supposed to be about. So whether you want a nice story, well-written dialogues, nice puzzles or challenging combat get this one.